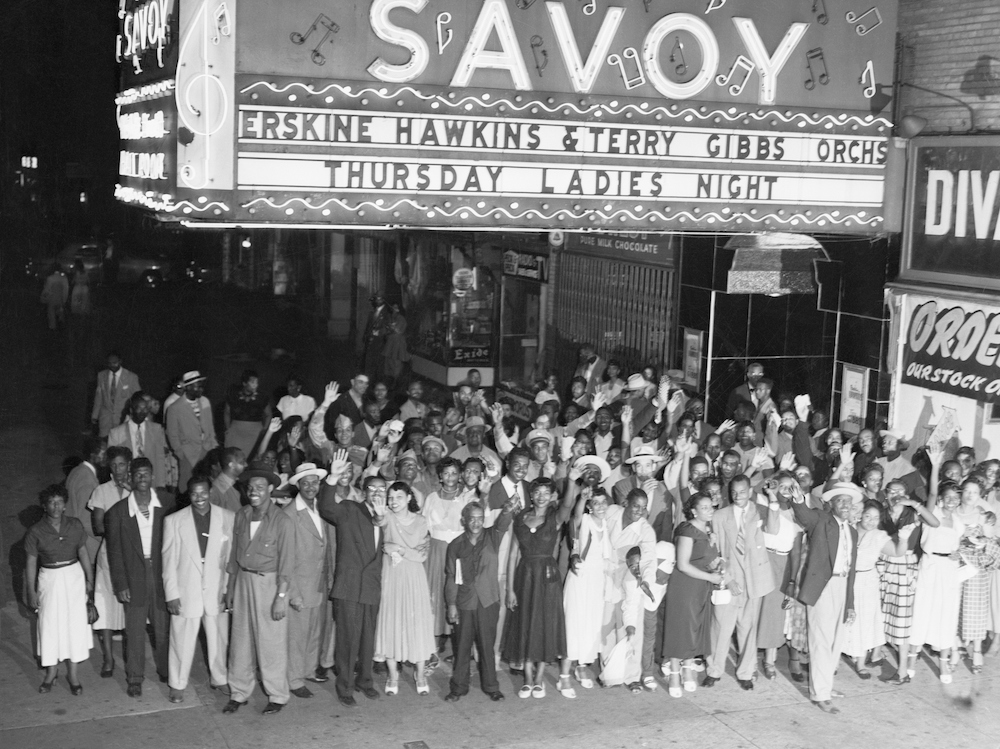 Arts venues offer space for gathering, community-making, and a respite for hard working city dwellers, and no neighborhood exemplifies the cultural importance of nightlife more than Harlem in the early to mid-twentieth century. The Black population in Harlem grew by 600% from 1910 to 1935, due in part to the fact that people of color were denied leases in other neighborhoods. Even as adequate housing was hard to come by, ballrooms and theaters were plentiful along the 125th Street corridor and Seventh and Lenox Avenues. One such club was the legendary Savoy Ballroom, which opened in 1926 and became known as the birthplace of Swing. At a time when almost all cultural venues were segregated, the Savoy was one of few integrated dance halls in America. It was a space of joyful expression for Black working class people, and a venue that was notably welcoming to queer folks. For less than a dollar to enter, you could frolic the night away on a mahogany and maplewood dance floor the size of a city block. 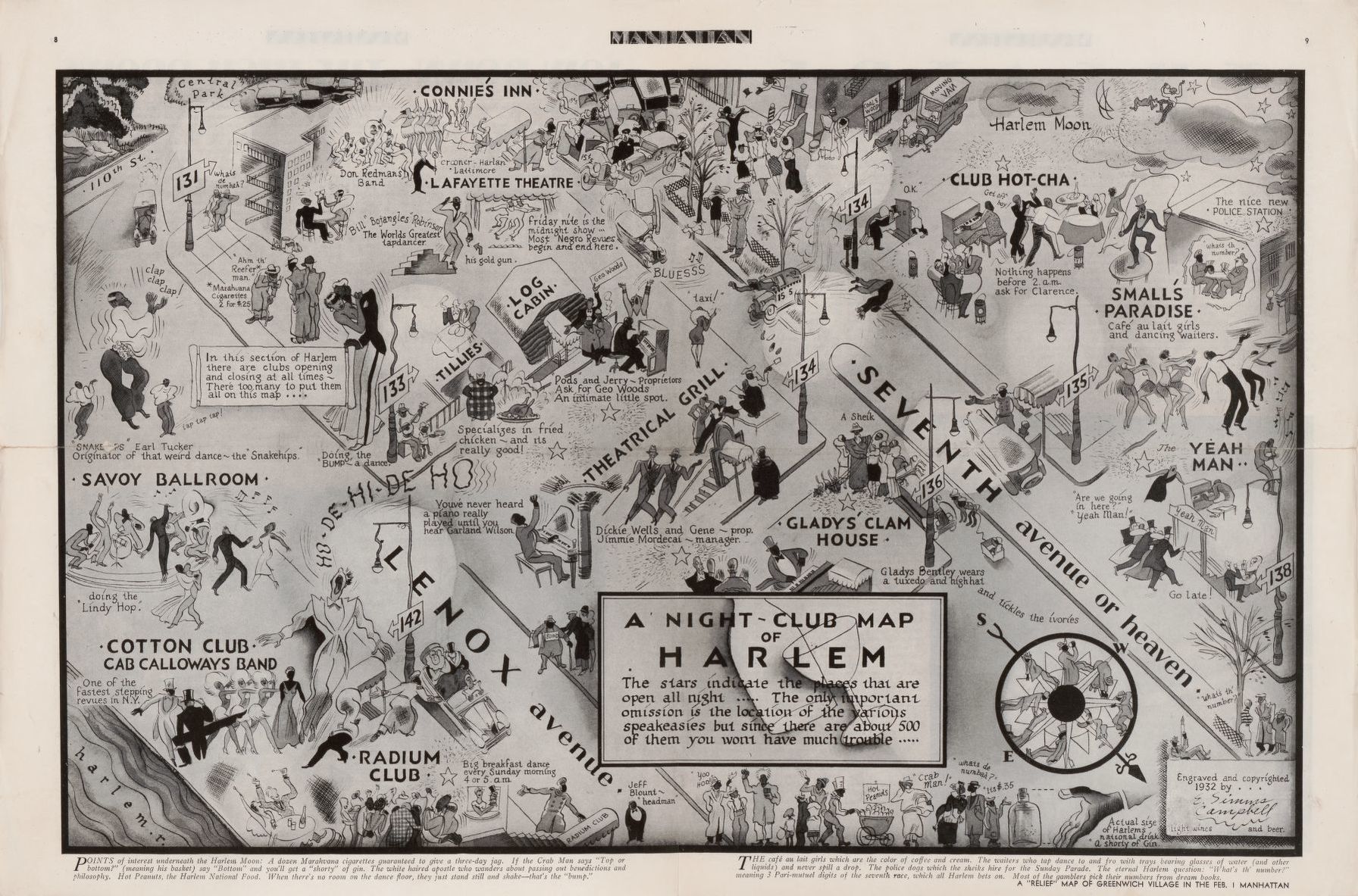 A map of Harlem nightlife created by E. Simms Campbell in 1932. Campbell was the first African-American cartoonist to be nationally published in The New Yorker, Playboy, and Esquire. Although primarily produced for a white audience, the map depicts the vibrant streetlife of the neighborhood. It was also used as the endpapers for jazz artist Cab Calloway’s autobiography Of Minnie the Moocher and Me. Originally published in Manhattan: A Weekly for Wakeful New Yorkers, Vol. 1, No. 1, 1933. Dell Publishing Company, New York, NY, Library of Congress.

In the late summer of 1943, uprisings broke out in Harlem. The backdrop was widespread discrimination in housing and hiring practices, price gouging, overpolicing, and the mistreatment of Black military troops returning from World War II. A Black soldier attempted to defend a Black woman named Margie Polite from police harassment after she demanded better conditions in her room at the Braddock Hotel. Crowds gathered in outrage after a white police officer shot and wounded the soldier in the hotel lobby, an establishment that was frequented by famous Black musicians and stars. People directed their anger at white-owned property in Harlem, resulting in several million dollars in damage. 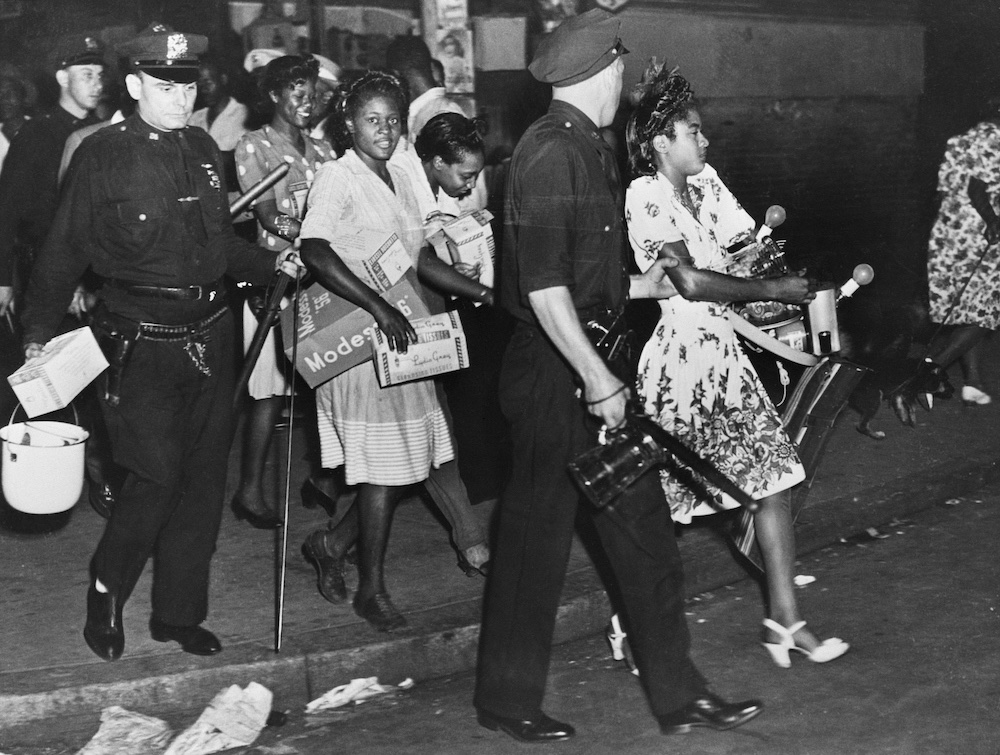 Women are arrested on suspicion of looting in Harlem, August. 2, 1943. Bettmann _ Bettmann Archive

In response, Mayor Fiorello Laguardia deployed the NYPD and military reserve as part of a culture war. A new police unit was devoted to the suppression of “vice,” targeting prostitution and gambling in areas visited by soldiers on leave, as well as any establishments harboring ”lone women” or “undesirables.” The Savoy became a target for an NYPD raid, and it was shut down on charges of prostitution. While the Savoy was able to eventually reopen and operate for another decade, in 1953 the building was demolished, along with the nearby Cotton Club, to make way for Bethune Towers/Delano Village housing complex as part of the federal urban renewal program.

The loss of historic venues like the Savoy Ballroom and more recently, the Renaissance Ballroom, point to the lack of value placed on historical sites in communities of color by municipalities and developers. The need for housing is pitched against the desire to preserve historical sites, weakening the community cohesion needed to push for a people-centered future. As we imagine ways to undesign the redline, we must recognize culture as an essential part of the built environment that has the potential to reaffirm the identity, history, and longevity of the people in a neighborhood.

“The legacy of venues like the Savoy is woven into the fabric of what makes Harlem, Harlem. Today, places like the Studio Museum, the Apollo Theater, the National Black Theatre, HarlemStage, the Schomburg Center, and many other organizations help to maintain an environment of vibrant arts and cultural exchange in the community.”